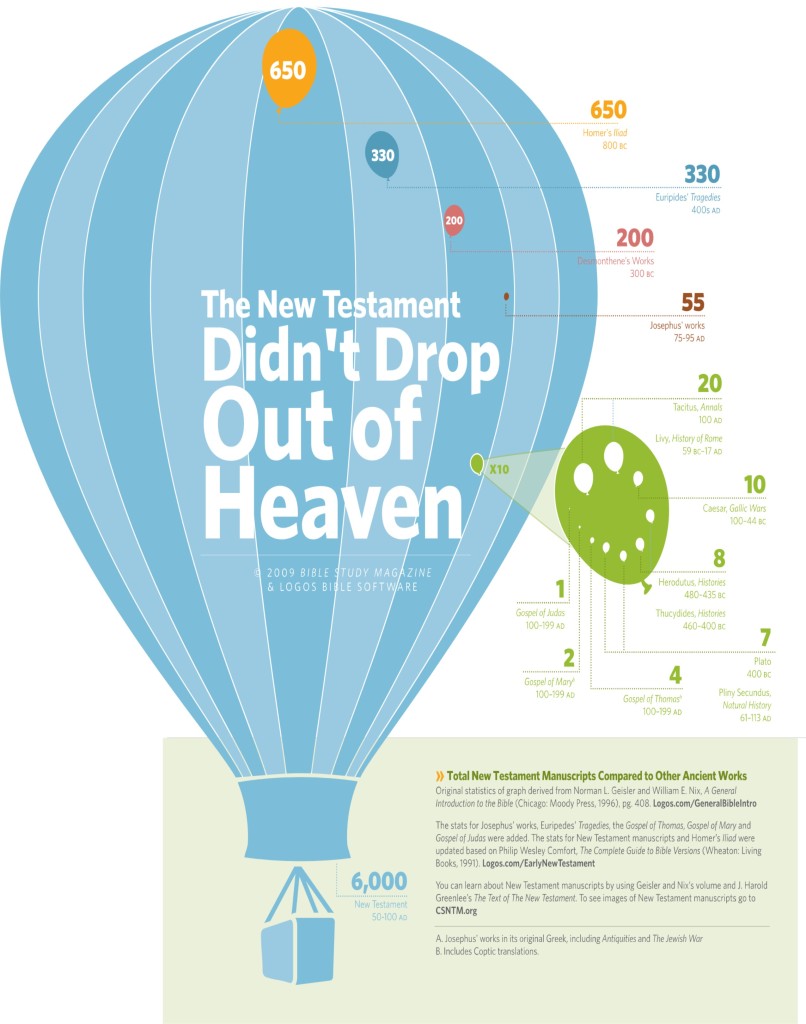 But of course, Plato’s works are more reliable than the New Testament. Obviously.

As promised, the second entry in a short series about the original languages. For the first entry, see here.

In this entry I’m going to examine a few simple examples for how the original languages can be used to defend the accuracy of the Biblical text. My goal in this entry is to show that with a moderate understanding of the languages, leaders can appropriately keep watch over the flock – and without them, they are inviting false teachers to prey on their church.

As a note, I’d like to remind the reader in a similar fashion to my first post. In no way am I elevating myself as an expert or more learned than most, my only attempt is to humbly suggest the importance of the knowledge of languages, as well as provide answers to my dear friends who have asked me questions about the languages.

So you’re a leader of a church. Sunday rolls around, and in walks Suzy and her three children. She calmly walks by the greeters at the door – not looking them in the eye as to avoid attracting attention. She makes a straight line right for you prior to service and says she really needs to talk to you. The conversation goes something like this:

Suzy: All this time you’ve been lying to us. The Bible does not say Jesus is THE God, it says he is just A God. It’s clear from the original text.

You: I see you are troubled, Suzy. Where did you come across this information?

Suzy: We had some visitors this weekend. The Jehovah’s Witnesses came to our house and showed us what the original text in John 1 says. We’ve decided we will be leaving your church to go to their Kingdom Hall down the street. 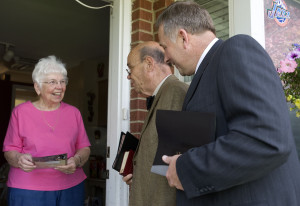 But they look so dapper…

So, where do we take this conversation from here? One option would be to tell her that’s not how the Bible reads, and it is not how the church has understood it for centuries. However, Suzy feels that she now possesses superior information. Unless you can show her that she doesn’t, she is likely to view that response as narrow-minded and grasping onto tradition rather than the truth.

This example of our neighbors in Mormon and Jehovah’s Witnesses group is actually quite common. In fact, it is likely this will be one of their opening claims should you entertain them when they knock on your door (David Reed has great information on this in this book). Their basis for this claim is that John 1:1 does not contain what is called the definite article before “God”. In English, our definite article is “the”. So, when we say “the boat” we are referring to an actual, singular, definitive boat. In the statement “Johnny walked down to the boat”, the author of this statement would be referring to a specific boat. If the author wanted only to refer to a generic, non-specific boat it would instead be written “Johnny walked down to a boat”. Here is what we find in John 1:1 :

The bold segment at the end is the statement in question. The Jehovah’s Witnesses and Mormon’s would claim that we should see the definite article before θεὸς (God), which would read “ὁ θεὸς”. However – this is where our knowledge of the Greek language comes into play. What we see here is an example of what is known as “Colwell’s Canon”. E. C. Colwell completed his research in about 1931, which is where we get this rule. The rule states that nouns prior to the “to be” verb in Greek (here seen as ἦν) will often lack the article and still be definite (Wallace, Greek Grammer Beyond the Basics, 257). Examples of this also occur in John 1: 49, John 8:42, John 19:21, Matthew 27:54 and approximately 250 other times throughout the New Testament.

My suggestion would be that there should be leaders in a church who can properly address a concern like Suzy’s. I’ve heard it said that something like this doesn’t happen very often, so we shouldn’t be that worried about it. Even if it had only happened once in the history of the church, isn’t that enough reason to be prepared for this kind of deception?

It’s late May, and all of the young college students are returning from school to live at home and work their summer jobs as a waiter at the local Ruby Tuesdays. Frankie has returned from his first year in college, and spent the whole year taking his Gen-Ed courses. He tells you of his bow-tie wearing, sport-coat toting young history professor who was able to tell him that nowhere in the four Gospel books does Jesus make an exclusive claim about himself. In fact, in John 14:6 Jesus actually just says “I am a way, a truth and a life”. Combined with all of his new post-modern friends he met, Frankie tells you that he won’t be attending church anymore. The New Testament is a sham, and anyone who believes what the Bible says is clearly uneducated. 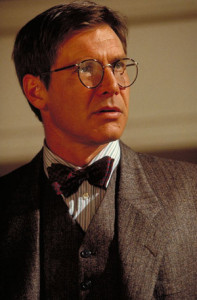 Seriously, I’d listen to anything this guy had to say.

Again, this is a simple example but is found all too often – especially in an age where young men and women are easily enamored by what appears to be a new school of thought they’ve never heard before. Just like scenario #1, it is so immensely important that leaders are prepared to address these types of comments. The sad reality is, our young people will follow whoever appears to have more significant knowledge.

In this scenario, I believe it important for our church leaders to be able to show the kind of humble love and understanding someone like Frankie needs, but also be able to show that they are knowledgeable and well-studied, able to defend against these sorts of grievous errors. In a loving way, it should be easy for a leader to walk Frankie through John 14:6, not only showing him the definite article (Eγώ εἰμι ἡ ὁδὸς καὶ ἡ ἀλήθεια καὶ ἡ ζωή) – but also a series of the original manuscripts the book of John comes from.

Scenario #3: “That isn’t in the original Greek.”

It is very easy for myths and rumors to get started. All it takes is the slight twisting of a truth, something that sounds right to the untrained ear, and it takes off like a rocket. In the church, all it takes is one adamant, charismatic false teacher and a whole congregation becomes grossly misinformed. This happens in the form of people telling you something in the English translation doesn’t exist in the original Greek. To fit their deceitful doctrines, false teachers will often make such statements to fit their agenda.

Scenario #4: Charlie Charismatic and the Case of the Missing Implications

Courtesy of Adam Ford, the brilliant mind behind adam4d.com

The Koine Greek language, like any other, is full of many grammatical rules and constructions that must be learned in order to understand the language. Simply knowing vocabulary and verb paradigms might aid you in getting a translation, but understanding why the text is written the way it is written is incredibly important. One of these rules is the usage of the negative word ‘μὴ’ in a question. μὴ is often easily just translated “not”, or might negate a noun such as “you are not brothers”. In the Koine Greek language, when μὴ is used in a question, it indicates a rhetorical question with an expected negative answer.

In 1 Corinthians 12:29-30, the Apostle Paul says “Are all apostles? Are all prophets? Are all teachers? Do all work miracles? Do all possess gifts of healing? Do all speak with tongues? Do all interpret?” It could be easy for someone like Charlie the overly Charismatic to try and say something like “See! Paul is basically saying don’t all possess these gifts? Clearly we can all have them if we have the faith for it.”

However, with an analysis of the sentence construction we would find the following:

Context could clearly show this, but if Charlie doesn’t listen the original text shows that each question expects a negative response. No, we don’t all possess them – but we are to desire them.

I don’t have space to go into myths about Bible translation but Dan Wallace has an excellent list here. It is well worth the read.

This was a lengthy article I know, but I hope many of you found it informative and saw how the original languages can be used to defend against error and deceit in today’s culture.

The next post will be on the importance of the original languages as it pertains to understanding the nuances and deeper meaning behind the text. 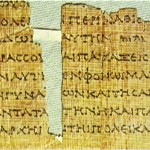