An Update From the Author

First of all, what an amazing Easter this has been. He has risen – He has risen indeed! I was encouraged today not only by the great gospel message from our pastor, but my church also had four testimonies and baptisms. Nothing quite tugs my heart strings as much as seeing lives completely turned around and changed by the gospel and witnessing that celebrated.

A quick update from my end. I have been completely overwhelmed (in some good ways, some bad ways) by the response of “Bacon, Jesus and the New Covenant”. This blog was started as a means to share some things with family and friends, yet over two days the post not only went global but reached over 420 likes on Facebook (as well as my first set of commenters to deal with) and has been read in over 10 countries. I am at the same time bewildered and humbled.

The next set of posts probably won’t be as engaging nor controversial as the “Bacon” post (although, seeing as how that post was unplanned, there may be another such post in the near future). I will be beginning a three part series this week on the importance of language studies, tentatively followed by a two part series on the pursuit of holiness and what that looks like for a Christian.

I am going to be attending The Gospel Coalition conference in Orlando next week, so expect some updates and thoughts from that woven in as well.

I am very grateful for all of you who have taken the time so far to read through this blog that is still in it’s infant stages. May God be glorified through the posts and discussions that take place here. 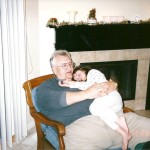 Next Story:
A Eulogy for Grandpa